In my teens I managed to take a great chunk out of my thumb, during an ill-judged sleigh ride on a corrugated iron sheet. A few months later, during a game of hide-and-seek, I fell out of a hayloft and tore a great big hole in my chin. Coming home with yet another bandage covering a selection of stitches, I distinctly remember the expression on my normally placid father’s face. I saw fear mixed with concern and a smidgeon of exasperation. In a harsher voice than I was used to, he sighed, “Sanne, please could you try and be a little bit more careful with yourself.”

When I shamefully confes 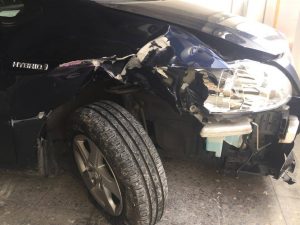 sed that within the space of as many years, yet another car of mine had been totalled, I heard the same tone in my brother’s voice. However, this time I could hear the genuine love and concern, rather than a desire to restrict my freedom.

Perhaps it is the energy of that same 14-year old tearaway that appears to be making me more than a little accident-prone right now. With the same bubbling joy as then, I once again plunge back into the business of life with all its sound and fury. However, it would be good not to kill or maim myself, let alone others in the process, given that my toys are a little more powerful now.

Can the 14-year-old daredevil and bon vivant learn to be a little more attentive to the material world she moves in, without losing her vitality. My rather binary attitude that you’re either moving forward, or not, may need adjusting.

As a third line being[i] I’ve always had a fractious relationship to the world of matter. From not always quite knowing my own edges, where I end and the pointy end of the table begins, to wanting to carelessly surf the tides of life without being tied down to practicalities. As my delightful Pilates instructor recently observed, even physically I am either full on, or fully off. Discovering that my body, with all its sinews, muscles and bones also has a graduated system of being activated, has been a recent and very welcome revelation!

Most of my life, the word caution was likely to invoke a gag reflex, listed right up there with temperance as one of my least favourite words! The immature child in me associates caution with boring fuddy-duddies — people who lack the juice to jump right into life. That’s been the dominant voice at least, but there is another…..

There is a secret self-part that has enjoyed a gentle crush on the kind of enigmatic characters played by the actor Clive Owen. In their sheer broodiness they are fully alive, yet don’t jump in feet first. These are the people who have the restraint to wait for the right moment to show their hand, they are the silent witnessing, observing kind. And the more I allow this energy to pervade my senses, the more I feel the power of a middle road between stop and go. The power of being in the moment, fully present, waiting and acting only when the time is right.

And then, when I look up the word Restraint in the Gene Keys’ Spectrum of Consciousness[ii], I burst out laughing. Because it is directly linked to the still small voice of calm from last week’s post. So, at the same time as I was musing and writing about the quietest point inside me, about that place of being, I was simultaneously out there in the world – doing my doing – with a fourteen-year-old’s wild energy. And that’s how cars get totalled. While Stillness is the most rarefied expression of the 52nd archetype, this flailing about energy, also referred to as the Shadow of Stress, is its densest form[iii].

The middle road, the ‘Clive Owen’ path, uses the energy of Restraint, balancing the two. So, the sequel to last week’s post is as follows; not only am I invited to practice a harmonious life balance between doing and being, I am invited to learn to do this in each moment, rather than in a kind of seesaw variety. Rather than being fully on or fully off, to find the ‘on while you’re off’ switch, let’s say, the Clive Owen switch. Which sounds a lot more attractive! No gag reflex there at all.

While stress might be the creative energy of a scattergun, restraint is the creative energy of a laser. Rather than holding you back and turning you into a spineless ninny, it focuses your power and allows it to land more effectively. This is more about a merger between doing and being… about holding back as you progress forward, about advancing in retreat. That’s a whole different kind of restraint. That’s the energy of the martial arts performer, of dressage riding, ballet, and even though it may seem wild and crazy and out there, the undercurrent of a live rock concert. The art of making it all look effortless, while underneath there is discipline and concentration. Again, not two of my favourite words, but who knows, even they may become my friends one day.

If I am to survive my next foray into the world, I will need to grow up a little, and find that balance or restraint. Not being held back, nor propelling forward… just being, like a Jedi, right in the moment. In that inner still-point. Or as the wise Greeks say, making haste slowly and savouring the journey! 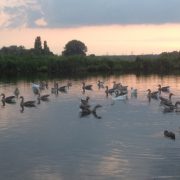 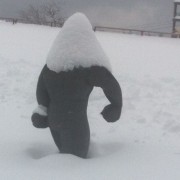 The courage to stay in no-man's land

Below, as above
Scroll to top